I shot a video recently which did quite well in terms of views and engagement. The video was on the topic of Cannabis and the negative consequences it can have on the brain. In particular, significant impairments to short term memory have been observed across scientific literature. Since I have recently been using small amounts of Cannabis (in the form of delicious edibles) I became interested in how THC and CBD effected the brain. Subjectively I have noticed my cognition worsens when using Cannabis. Even the day after ingesting Cannabis my brain is sluggish and I perceive a slight Depression in mood. My investigations led me down a number of interesting rabbit holes.

The first clue I picked up regarding Cannabis and how it relates to mental functioning was its pharmacology. I will quote from the following journal:

Apart from bringing about euphoric feeling, its utilization would also result in significant anticholinergic effects. The anticholinergic effects have been postulated to be responsible for the cognitive deficits arising from the consumption of cannabis. Other hormones, such as the luteinizing hormone, prolactin, and growth hormone production are also affected.

Supplementing with a high quality Choline source is crucial to give the brain proper building blocks for Acetylcholine production. A popular source of Choline is Alpha-GPC. Alpha-GPC has high bio availability and improves memory. Other notable effects include increased physical power output.

Since its discovery in the early 1990s, COX-2 has emerged as a major player in inflammatory reactions in peripheral tissues. By extension, COX-2 expression in brain has been associated with pro-inflammatory activities, thought to be instrumental in neurodegenerative processes of several acute and chronic diseases.

Cannabis increases COX-2 in the brain. COX-2 is an inflammatory signal. Inflammatory responses in the brain contribute to neurodegenerative disease and cognitive impairment. COX-2 inhibitors like over-the-counter NSAIDs (Ibuprofen) can reduce this Cannabis induced inflammatory process. Taking Ibuprofen before or after using Cannabis can greatly reduce the severity of these negative cognitive consequences. Taking Ibuprofen the day after you use Cannabis improves cognition relatively quickly and lifts the fog. Paired up with a high quality source of Choline and you’re talking about complete and total recovery. This combo is perhaps the cheapest and most effective method of improving brain performance when Cannabis is consumed frequently.

Cannabis reduces REM sleep. REM sleep is the stage of sleep characterized by rapid eye movements and dreams. The brain is highly active during this stage of the sleep process. REM sleep is responsible for encoding new memories into the brain. Without proper REM sleep memory begins to suffer and it becomes difficult to remember events from days before. During REM sleep Acetylcholine activity is high while other neurotransmitter activity is low. THCs anticholinergic properties are to blame here. Once again, taking supplemental Choline at night could be a possible solution. Aniracetam has also been shown to improve REM sleep under specific circumstances but more studies are needed to prove its efficacy.

I highly recommend checking out Smarter Cannabis. In the book I outline everything you need to know about maintaining brain function while using Cannabis.

While Cannabis remains an effective treatment option for certain conditions it is certainly not without consequences. Cannabis impairs the cognition of the user through anticholinergic mechanisms, reduces REM sleep, and increases brain inflammation through COX-2 uptake. Certain supplements like Ibuprofen (COX-2 inhibitor) and Nootropics like Alpha-GPC (Cholinergic) can help mitigate the negative effects of Cannabis to some degree. Like all compounds, moderation is key. Cannabis should be moderated and consumed in the appropriate amounts/frequencies as determined by your subjective experience.

Trading toxic effects of heavy or long-term recreational cannabis use and its resultant brain damage for toxic effects of NSAIDS causing stomach bleeding, ulcer and liver and kidney damage, hypertension or stroke would not be indicated for any healthy individual. You don’t want to substitute or multiply side effects.

There is no remotely favorable risk-benefit ratio for long-term recreational use of cannabis or Ibuprofen in healthy persons.

Late stage cancer, chronic or intolerable, acute pain management, palliative care for the terminally ill are the few cases where the benefits of shutting down the CNS, cannabis side effects of brain tissue and other organ damage with immune suppression, and the risk of cannabis itself causing cancer were ever considered acceptable. 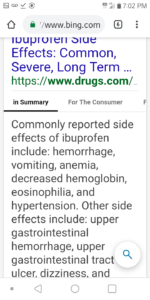 The bottom line is do abstain. Do not use drugs of any kind recreationally. All drugs have side effects. There is not, contrary to drug dealer disinformation, any such thing as a recreational drug. There is nothing recreational about drug toxicity, disease, disability or drug-related death.

Avoid prescription drugs whenever alternative treatments are available. If unavoidable, use prescription drugs only under competent medical supervision, with extreme caution, and only as a therapy or treatment of last resort after all conservative measures are exhausted.

Cannabis is NOT anticholinergic.
https://pubmed.ncbi.nlm.nih.gov/3620017/

There is also a lot of misinformation in the other comments

Tarun
Reply to  Someone

Man, i was really bumming out reading this article. But then POW! Just like that the whole illusion vanished and i’m back in wonderland. Thanks Man!!