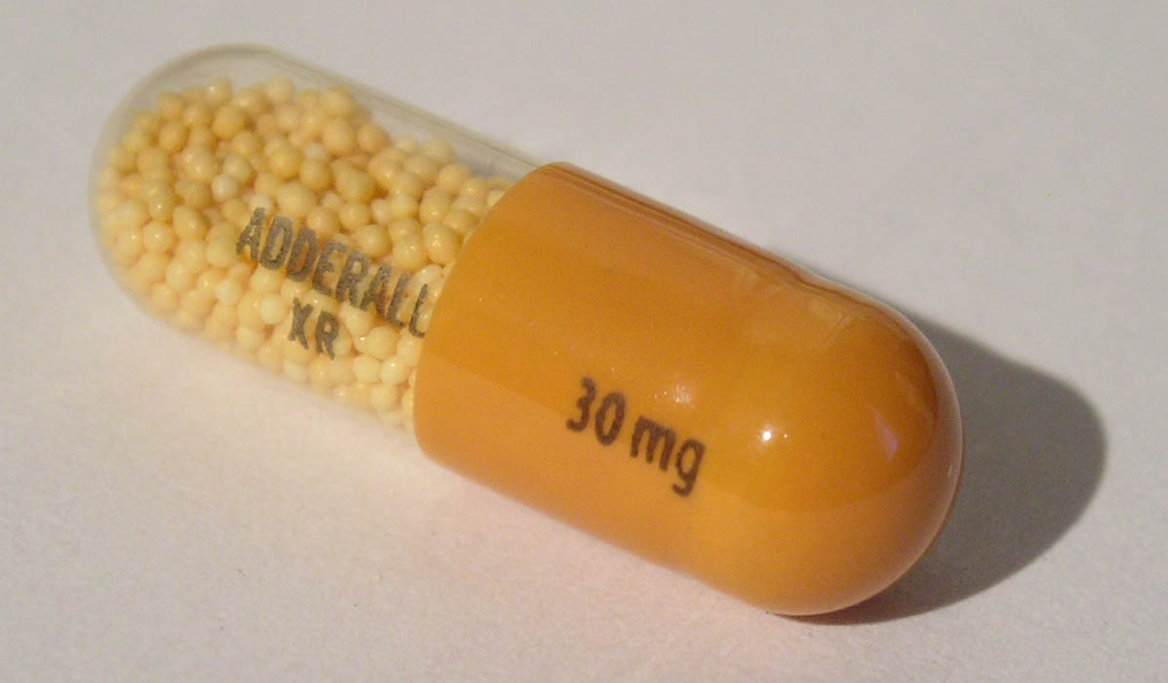 Modafinil and Adderall are 2 powerful compounds used to focus the mind and deliver long lasting mental energy. Both compounds ultimately do the same thing but work in different ways. They both represent the best productivity powerhouses the pharmacological industry has to offer and in this post we’re going to explore the core differences and similarities.

Adderall is a prescription amphetamine based drug used to treat ADHD. Amphetamine has been around for quite some time and found massive widespread adoption by British and American troops in WW2. Hitler was so hooked he couldn’t even get out of bed without his daily shot of Amphetamine. The discovery and synthesis of Amphetamine happened by complete accident. Los Angeles chemist Gordon Alles was testing and experimenting with a new and improved version of Ephedrine. After experiments on himself and a few patients he concluded that this newly formed compound had no direct effect on asthma, but certainly had effect on overall mood and energy levels. What he synthesized in his lab soon became the first Amphetamine based prescription substance they called Benzedrine.

Years later government realized it couldn’t have society running around all hopped up on Amphetamine and quickly scheduled the drug and cracked down on how generously it was prescribed.

So how does this wonder drug work?

Adderall works by modulating several key neurotransmitters in the brain, most importantly Dopamine. The theory is individuals with ADD/ADHD have low levels of Dopamine. This deficit of Dopamine in the brain causes an overall inability to focus and pay attention. Dopamine is the brains reward system. When you achieve a goal, complete a level in a video game, or win at a sport, Dopamine floods your brain with signals to say “Hey, keep doing more of this!” It’s positive reinforcement at the neurological level. Basically our brains evolved to reward any behavior that kept us alive. This is why sex is so electrifying. Your brain is rewarding you big time for securing another generation of the species (even with the pull out method.)

Inside your brain you have a natural balance of chemicals and neurotransmitters. If your brain senses there is too much of one chemical floating around, it will dispose of it in a process known as chemical reuptake.

Adderall functions as a Dopamine Reuptake Inhibitor. This means Adderall and Amphetamine allow more of the Dopamine neurotransmitter to float around in the brain giving rise to the classic effects of Amphetamine like increased focus, euphoria, and other notable effects. 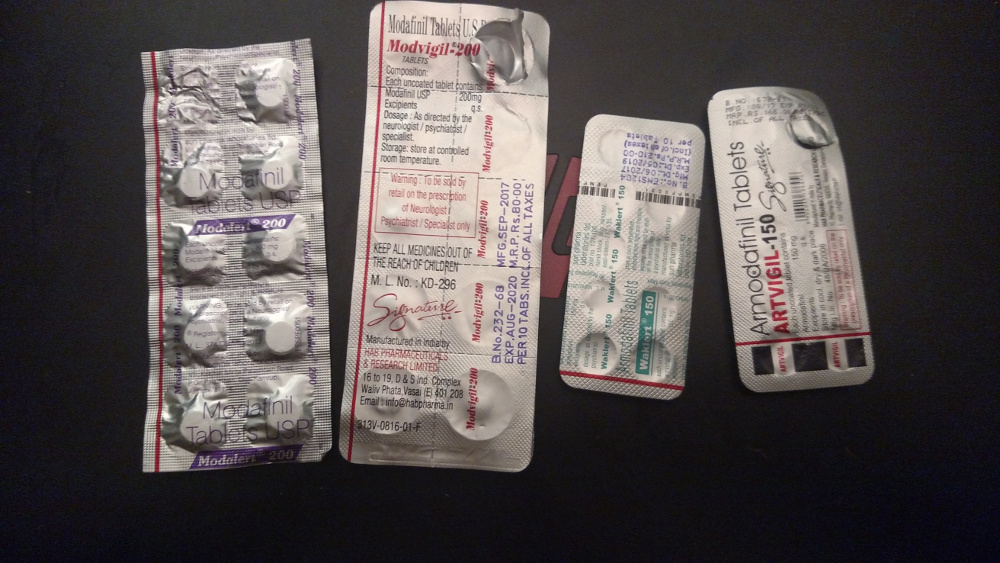 Modafinil is the Wakefulness agent generating a flurry of buzz and press thanks to notable bio hackers like Dave Asprey and Tim Ferriss. Modafinil sees heavy usage among entrepreneurs and nootropics enthusiasts who praise the drug for its powerful wakefulness effects and high safety profile. In terms of stimulants it’s a very safe compound with few negative side effects.

Modafinil was approved in 1998 by the FDA for the treatment of Narcolepsy. It has since been prescribed for a number of sleep related conditions like shift work sleep disorder.

The mechanisms of action behind how Modafinil works are yet to be fully understood but studies indicate Modafinil is a mild Dopamine Reuptake Inhibitor, which would explain the drugs slight stimulatory and mood boosting properties.

As of 2017, the therapeutic mechanism of action of modafinil for narcolepsy and sleep-wake disorders remains unknown.[37][38] Modafinil acts as an atypical, selective, and weak dopamine reuptake inhibitor which indirectly activates the release of orexin neuropeptidesand histamine from the lateral hypothalamus and tuberomammillary nucleus, respectively all of which may contribute to heightened arousal.

Another study suggests the same mode of action with the neurotransmitter noradrenaline:

These results suggest that modafinil blocks the reuptake of noradrenaline by the noradrenergic terminals on sleep-promoting neurons from the VLPO. Such a mechanism could be at least partially responsible for the wake-promoting effect of modafinil.

On paper these are 2 somewhat similar compounds in that they both effect key neurotransmitters like Dopamine. So what’s the core difference? In my experience using both of these compounds I can say the 2 compounds are almost nothing alike. Adderall apples for apples is a much more powerful compound in terms of raw stimulating properties. I mean, it’s literally Amphetamine.

The Adderall experience is one of Euphoria. It’s an in your face experience. When you take Adderall there is no doubt in your mind that something truly powerful is rushing through your veins. The sudden rush of Dopamine is felt in all aspects of your day. Music sounds better. Your focus is improved 1000X. Boring repetitive tasks seem like the most fascinating activities. And good luck sleeping.

Modafinil is much more subtle. In fact, you could almost forget you took the little white tablet until you become conscious of just how awake you are. That’s the thing about Modafinil – you feel really awake. You feel awake but there isn’t that potent rush of Dopamine you feel with Adderall. Only calm energy. There is however a slight boost in mood, an overall feeling of being switched on so to speak. But it’s not the peel-your-face-off type of speediness quintessential to the Amphetamine experience. Granted, some people react to Amphetamines in a calm manner and I salute that fact.

If you’re looking to get high Modafinil is sure to disappoint but if what you’re seeking is something more mild, Modafinil is your new best friend. Unlike Adderall which comes with a metric ton of side effects, Modafinil is mild on the mind and body while ultimately achieving the same purpose of Adderall – making you focus and keeping you alert.

Safety profile of Modafinil and Adderall

Overall Modafinil is a much safer compound with few side effects and low risk for abuse. Because Adderall interacts with the Dopamine system in such an aggressive way, it will have more side effects and a much higher addiction rate and potential for abuse. However, both are stimulants and anecdotal reports from both sides of the fence show cross over side effects. Common side effects from stimulants are anxiety, increased heart rate, lack of appetite, insomnia, panic, irritability, dilation of pupils, etc. Once again, these will be much more pronounced and intense in Adderall than Modafinil due to its potency.

Taken from the NIH regarding the toxic nature of Amphetamines:

None of that sounds too exciting. Cross reference that to basically zero reports of anybody overdosing from Modafinil. Actually, there is this one report of an unsuccessful Modafinil suicide.

The medication was prescribed for her mother to treat symptoms associated with multiple sclerosis. Approximately 2 hours following ingestion the patient complained of headache, nausea and abdominal pain. Her ECG demonstrated prolonged QTc interval. Observation for 72 hours revealed 24 hours of inability to sleep, tachycardia, and dyskinesia. There was no deterioration of kidney or liver functions, and no change in complete blood count or blood pressure.

So basically she took a ton of Modafinil and couldn’t sleep for 24 hours (sounds about right.)

Modafinil and Adderall are 2 stimulatory compounds that work in both similar and different ways. Both work with the Dopamine system to produce stimulating effects. Adderall is much more powerful in its actions and carries an exponential risk of abuse. We have a lot of data on Adderall but little data on Modafinil in terms MOA’s (mechanisms of action.) From what the studies show, Modafinil is a safe compound that promotes general wakefulness and carries subtle mood boosting properties. Adderall has a long history of use and abuse as a performance enhancer and should be used with caution due to its aggressive relationship with Dopamine. We can draw some similarities between the 2 compounds but at the end of the day these are 2 different substances entirely.