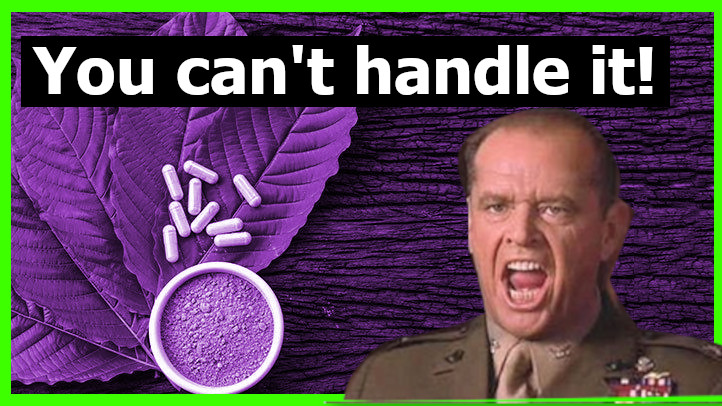 It’s obvious by now that Kratom has picked up a decent amount of momentum, even seeping in to mainstream society to a degree. I realized Kratom was making significant strides when I found a number of local “head shops” stocked a healthy supply of the green powder. (Head shops in quotes because I believe nobody calls them that anymore, but that’s what we used to call these places.)

When anything gains such notoriety you inevitably see the war. This is the war between people who think Kratom is a God send while others argue Kratom is the worst thing that’s happened to them. On one side you have people who would like to see only positive discussions around the plant. If things went their way, all these reports of people withdrawing and posting their negative experiences would be wiped out – to keep Kratom a secret of course. You know, keep things on the downlow so as to not alert the attention of the FDA goons, and so Kratom remains in a somewhat unscrutinized legal gray area. And hey, I’m all for that.

On the opposite side you have people who’ve had such a horrible experience they see it as their duty to expose the “truth” about Kratom. They argue that many Kratom users are downplaying the danger of the plant to the detriment of society at large. They blame the Kratom community for not being honest about the addictive properties and being less than truthful about how difficult and agonizing it is to come off and quit.

Now I also understand this side and do believe people should be aware of the realities – Kratom IS addictive and the withdrawal process can range anywhere from mildly annoying to downright agonizing, with PAWS lasting months or sometimes longer. With so many of these stories circulating you can see how Kratom has fallen upon the all watching eye of the FDA and other regulatory bodies.

Kratom should not be illegal despite its potential addictive and health consequences.

I’m very much a libertarian in this regard, in that people should ultimately have the right to make choices, choices that effect only them, and also own up to the responsibility that comes along with such freedom.

The truth is, such responsibility cannot exist unless people can have an open dialogue about the pros and cons as to make an informed decision.

In our current state we have a side of the Kratom community that won’t say a negative thing about Kratom, even though they understand there are very real consequences (the severity of these consequences can be argued about.)

This tells me there isn’t so much a problem with the discourse about Kratom, but a fundamental problem with how society at large still views drugs and how it tolerates public discourse. We fear to speak the truth because we live in a society that is quick to limit the freedoms of its citizens. (And oh how we’ve seen this in the recent years.)

The common enemy is we still live in the stone age when it comes to drugs, and because we fear the consequences of government we are forced to be less than honest and to stifle our speech. We are forced underground to a degree because we don’t have a government that listens, and we have giant pharmaceutical companies and corporations who get to decide what drugs deserve research and status.

Is this a problem easily solved? I don’t think so.

But I do think the arguments should rise to a level both sides can agree upon – the fundamental idea that in spite of the negatives it is up to us to decide what we put in our bodies, NOT government.