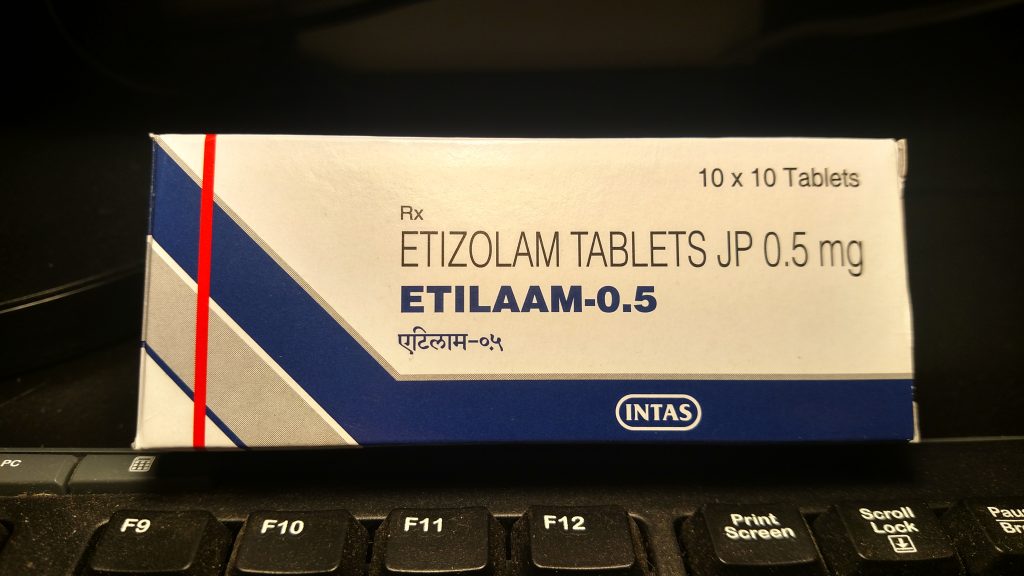 **NOTE** I no longer recommend the source outlined in this post. Nowadays I redirect people to Chemical Collective. **NOTE**

Todays post is unorthodox because I’ve never directly talked about anything more hardcore than Phenibut. I’ve used Phenibut extensively over the years and found it pales in comparison to the strength of pharmaceutical benzodiazepines and related analogues.

Etizolam is one such anologue I discovered through Reddit and after careful research I decided to pick some up. I was curious to see if it really was an effective (and legal) alternative to prescription grade benzodiazepines like Xanax, Ativan, Klonopin, and Valium.

NOTE **I am aware Etizolam is not a direct Benzodiazepine but I will be referring to it as such in the post. It carries all the same effects, side effects, and dangers as traditional benzos and makes sense to group in the same category.**

Finding a source was a massive hassle. I was reading mixed reviews regarding some major vendors and reports from users who never received product. Right as I was attempting to secure a shipment the largest vendor at the time went out of business. It actually took me a few weeks before I settled on a lesser known vendor called BlueKem. Even BlueKem had multiple bad reports on Reddit claiming the owner was “exit scamming” and shipping out product that wasn’t true Etizolam. However, I found enough counter reviews to finally pull the trigger and pay the guy.

And that’s the other thing. Once you find a vendor you better know how to buy product with Bitcoin. I’ve outlined a guide here for newcomers.

I transferred the required amount of Bitcoin and patiently awaited my order. It took multiple days before I received a tracking number. When I did receive tracking it stayed in “Label created, in route to USPS center” mode for a number of more days, finally arriving a week later.

Initially I held on to the Etizolam for a number of weeks before testing. I wanted to wait for a day where my anxiety levels were in a heightened state. This in my mind was the only way to test the true power of the Etizolam. Most people don’t understand the benzo experience. For most people popping a Xanax will be a lack luster experience. If you have intense anxiety however popping a Xanax will produce a rush of euphoria as you note how normal you feel. It’s more like a “holy shit, I actually feel normal for once!” type high. For those suffering through daily anxiety Benzos are a God send with the devil following close behind.

I started off with 1mg as a starting dose. Without a tolerance to Benzodiazepines this will produce notable effects and take the edge off but will still allow you to function on a normal level. 1mg is a small dosage and that’s where I wanted to begin.

2mg of Etizolam and you will most definitely feel the sedation although you might still be able to function normally. All anxiety is melted and you’ll have a nice euphoric buzz going on. The risk of redosing is real.

3mg+ and you begin to dive into the potential black out zone. At this dosage muscle coordination is greatly effected, speech is slowed, and memory is greatly impaired. Even If you don’t black out you will still find it very difficult to recall the events the day after.

Anything after 4mg and your chances of blacking out greatly increase and so do your odds of doing or saying something real stupid.

At 1mg I was notably more chill. I remember friends coming over and just chilling on a rocking chair I have. I was drinking tea and so relaxed listening to everyone else talk. It felt like I was not a part of the world and things were just passing by and happening. Overall I was non reactive to the events happening around me. I could talk or not talk. I could watch the TV or not watch the TV. Didn’t matter much either way to me. I enjoyed talking to everyone and just feeling free to express anything I wanted. My inhibition and motor coordination was slightly effected. As I would stand up I would be slightly unbalanced. When I poured tea from the tea kettle I would miss and spill a little. It was interesting how I was aware of all this taking place. At higher doses you really have no idea just how messed up you are.

In my head I wondered what it would be like to take more but I didn’t. The next day I shot a video and uploaded it to the You Tube channel detailing my experience.

What followed in the coming weeks could definitely be considered abusing the drug. The following week I decided to push the envelope and take 2 milligrams. This was a nice dose for sure. We had a good friend over and everyone was drinking except me. That is all I remember. I woke up 2 days later to find my Etizolam stash was almost completely depleted! I munched them all over the course of 2 days and don’t remember any of it. Apparently we took a road trip, a long one at that and I seriously haven’t the faintest memory of anything. Obviously my friends noticed and so I explained what had happened. Luckily everything was cool. They said I was talking and moving like a snail and couldn’t hold a cup for the life of me. I was also apparently the music DJ for the entire trip and had long conversations about how todays rap sucks and the rap from the 90’s was much better. That’s funny considering I don’t listen to rap that much.

I have drawn a few conclusions about Etizolam. The first is this drug must absolutely be respected. I would personally never go over 1mg. At 2mg I clearly thought I could handle more when in fact I was already pretty loaded. These things have a high potential for abuse and reusing. The thing about Benzos is you think you’re fine when you’re not. To others it is very clear there is something not quite right with you. Imagine my friends who know I don’t drink watching me turn slowly into a zombie right before their eyes and having no idea why!

This is a real drug for sure. Just as powerful as any other Benzo you can think of. I would actually argue it’s stronger than some. Having had experience with Valium I can say Etizolam is much stronger.

If you choose to experiment with Etizolam do so at your own risk. It’s very easy to use it everyday. It takes superhuman will power to have this in your drawer and keep your distance. Benzos should be respected at all costs. The withdrawals are horrible, some of the worst WDs you can imagine and this stuff is extremely addictive. Consider just steering clear of Etizolam and opt for Phenibut instead. It’s much safer and you won’t black out.

Thanks for the review. I ordered some blotter 1mgs. I’ll stick to taking only 1mg even though I suffer from intermittent anxiety. I also take methadone so I gotta be careful mixing those.
Thanks again.
Oh, btw, did you try the blotter or pills?