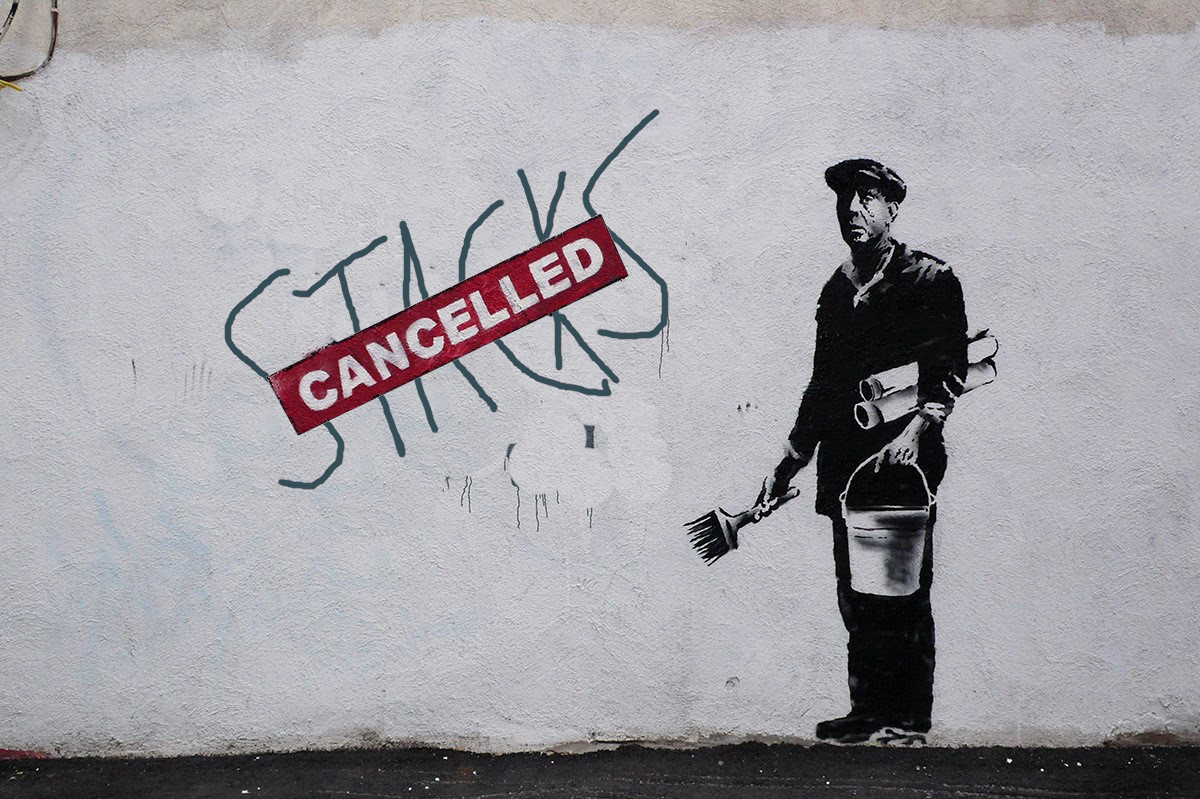 I shot a video the other day titled “The Death Of The Nootropics Indusry 3.”

This was the third installment to my documentation of the industry decline. In the first video I discussed the decline of Powder City – THE industry powerhouse vendor who went out of business after a lawsuit involving a young man and Tianeptine. The man overdosed and the parents sued. The lawsuit completely buried the company under a financial burden they couldn’t recover from. This event put Nootropics on the radar and forced federal agencies like the FDA to examine vendors more closely. The industry was no longer an easy money grab and forced entrepreneurs to think twice about their business pursuits.

My second video outlined a number of email communications I had with popular Nootropics company Nootropics Depot. I was a long time affiliate of the company and earned commissions based on my product recommendations (Not much money mind you, in fact, my commissions barely covered my monthly Nootropics expenditure.) They reached out to me on multiple occasions and took issue with some of my content and claims. Granted, many vendors see little to no heat as long as they keep their claims compliant and don’t make health recommendations. This is why you often don’t see them making dosing recommendations for certain products, or marketing products as “for research purposes only.” This is code for “Look at how compliant we are!!” I do take issue with the “for research purposes only” loophole as I believe it ultimately damages the end user who gets left in the dark. It’s a bullshit legal game where unsavvy customers bear the brunt of the consequences and everyone else gets off the hook.

The affiliate manager conveyed the companies wishes to step away from the more synthetic varieties (Piracetam etc) and to refocus their brand on to their line of natural stacks and supplements. One day I woke up and my affiliate account had been terminated. (admittedly, I was slow to begin changing or outright deleting my content.) At the end of the day, ND wasn’t paying me enough to really care – and they don’t need me anyways. It was clear to me Nootropics Depot saw the writing on the wall – they were protecting their business from any future changes to the industry, whether those changes be to the regulatory system or to the supply line. They knew betting on synthetic Nootropics was a bad bet and pivoted quickly to stacks that were more or less safe and tolerated by the FDA. They shoved all their mainstream heavy hitters to the back end of their website and began highlighting the natural stuff. I’m not a business genius but I can tell you with almost 100% certainty they make more money selling stacks like Piracetam, Phenibut, and Phenylpiracetam than they make selling optizinc, KSM-66, and magnesium stacks – although from my own data I can say they certainly sell lots of KSM-66 and the other forms of Ashwagandha. They pump a lot of money into advertising, and I wouldn’t be surprised if the racetams continue to outsell their natural stacks with little to no marketing.

ND runs out of Piracetam

The next cause for concern came when Nootropics Depot completely ran out of Piracetam. This created quite a stir with customers. Do you think such a stir would occur of they ran out of their sleep support stack?

Here is a snapshot from Reddit with insight into the situation from one of the owners of ND (At least I believe he’s the owner.):

Thank you to a subscriber who sent me the following thread on Reddit: 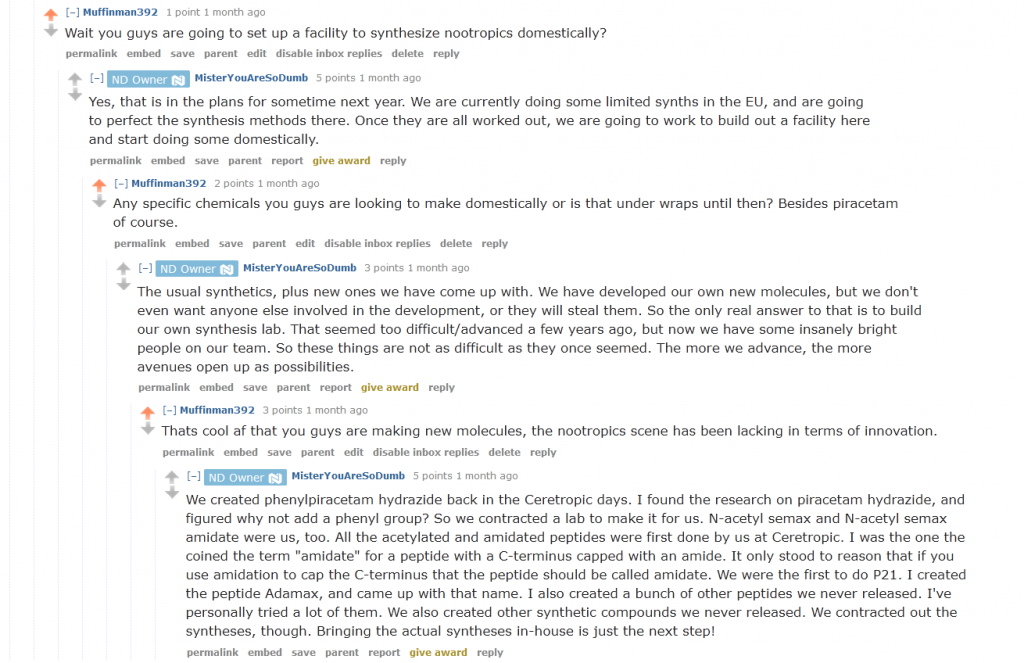 So here we see another problem with the industry – a heavy reliance on overseas manufacturing. This is actually 2 problems. The first problem is you don’t control the production of the product meaning you’re at the mercy of the overseas supply chain and also the quality. The second problem is U.S. customs and getting the product into the country with no problems. I work in ecommerce where we regularly receive product from China. Not only do we pay tariffs on said products but we also get boxes taped over with yellow U.S. customs tape – basically there’s a bunch of gorillas at customs who’s job it is to slice open boxes, examine the contents, and tape things back up once they’ve examined things thoroughly. They simply slice open whatever they want. Do you think they take kindly to Kilos of white powder coming in?

It appears for whatever reason Customs is holding shipments of Piracetam and not allowing them to clear. They have seemingly singled out Piracetam while allowing the other smorgasbord of random white Nootropic powders to come through – the other racetams etc. I don’t understand the logic here but it’s the case none the less. I know in the case of MondialK, he got around this by making false declarations (Piracetam labeled as Mandelic Acid.) It could also be Customs is more lenient towards certain countries. Certainly products from China are more closely examined.

To speak to the manufacturing aspect of Nootropics it’s important to understand all this product comes from overseas. It comes from China or Europe in the case of the racetams, and the Modafinil is generally made in India (HAB Pharma and Sun Pharma Respectively.) I have suspected for a long time that Flmodafinil (probably coming from China) is no longer being synthesized. Could it be expired patents? I don’t know, but if you look at Science.bio you’ll see they are out of stock, and also MondialK ran out a few weeks ago and told me over email that he was on his final batch with no plans of restocking. Why would a company suddenly stop selling a profitable product? More than likely whoever was manufacturing Flmodafinil decided it was no longer profitable, or perhaps they used those resources to make other more profitable pharmas…Or maybe local government regulations outlawed its synthesis. I can’t be 100% certain.

On September 17th Chemical Collective (Overseas Euro Purveyor of 1P-LSD and other RCs) stopped shipping to the U.S. Once again, why would a company with a large U.S. customer base suddenly cease shipments to the country? Do they hate money? When you deal in grey area RCs this could be for a number of reasons (many times companies don’t want to take the legal risks), although I do suspect problems with the postal system are partially to blame. COVID-19 hit the postal system hard and I always hear stories of customers not receiving product. Perhaps refunds hit them hard, and they may also want to limit shipping to countries where laws are more lax. It’s more than likely local regulations as I will explain below…

The last and final update to this post is the closure of MondialK. I had secured product for Alices Restaurant through MondialK and was obviously sad to see him go. Alexis announced via a banner on his website that he would be closing doors on Sep 17th 2020. I find it interesting both Chemical Collective and MondialK decided on this exact date to close up. It does make me think that there’s something going on with their countries related to shipping or some other logistical aspect of business. I know both of them are based in Europe. In the case of MondialK, he ships his product from Luxembourg and Chemical Collective ships from the Netherlands – 2 countries almost smacked together in proximity. This does suggest something happening in these regions unrelated to the U.S.

Overall I see the industry is struggling, but I remain hopeful for the future. We shall see what the future holds. It does look like Nootropics Depot is working on synthesizing some of the popular synthetics domestically here in the U.S. I will be rooting for that but also not holding my breath.

Alice will be shipping off the remainder of her Flmodafinil and also the somewhat modest stock of 1P…and that’s a wrap folks!!